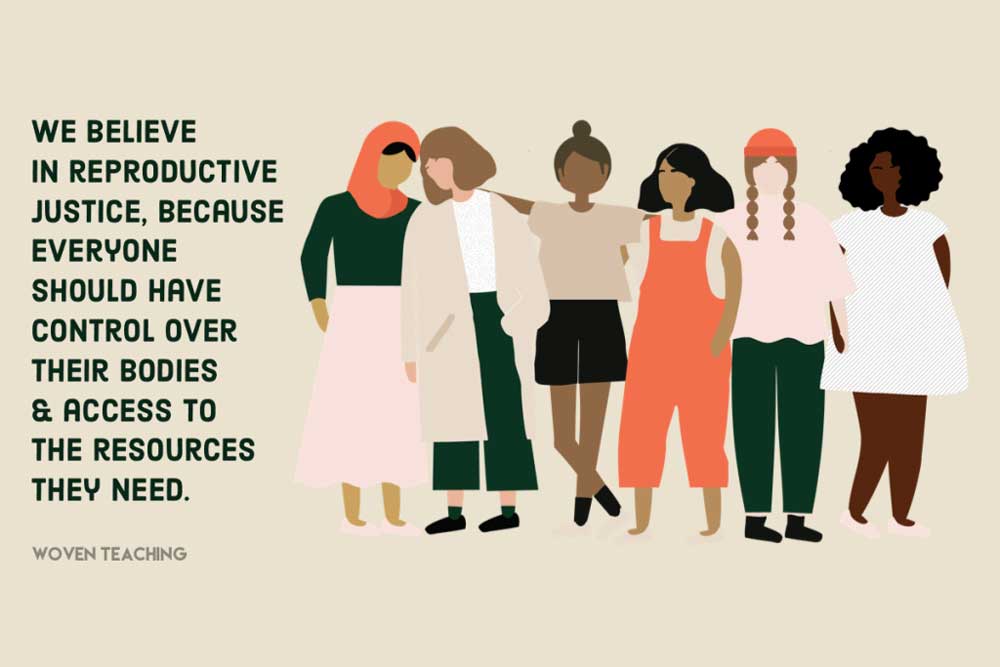 Although the fight for reproductive justice had begun decades back, the term reproductive justice was coined back in 1994. This was just before the historic 1994 International Conference on Population and Development in Cairo when a group of African American women gathered in Chicago after having realised that the women and reproductive rights movement then was largely led by, and was representative of middle-class, wealthy white women. A lopsided movement like this  was unlikely to defend the needs of women of colour and other marginalized groups including trans individuals giving  birth to a new concept – reproductive justice. Reproductive justice, unlike reproductive rights is not only focused  around the legal right to reproductive health care services such as abortion and contraceptives but  is  a more comprehensive, holistic and inclusive approach of empowering every individual to ensure that they are able to exercise this right of bodily autonomy, right to reproduce and raise their children in an environment free of any intrinsic or extrinsic bias.

Now more than 25 years later, why  is it imperative  to reiterate the concept of reproductive justice? The answer is simple-  antagonistic movements have become stronger than ever and the  fundamental basis  of women’s reproductive rights are being attacked relentlessly. In this context, reproductive justice not only helps us counter those attacks, but also stands to strengthen our movement and garner more allies as we do so. As nifty as ‘freedom of choice’ sounds, it has become evident that saying is easier than doing, by reflecting on the status of reproductive rights despite some of the most liberal laws being passed by governments around the world. The rhetoric of “choice” still pertains only to those who have the means and resources to get the full spectrum of options, among which they can conveniently choose the ones that cater best to their needs.  It has become reality that not all those who need these services have that kind of privilege.

The reproductive justice framework aligns the issue of reproductive rights with the larger institutional context of structural oppression like racism, casteism and capitalism. On an individual level, reproductive justice addresses social, political and economic disparities limiting  an individual’s access to reproductive health services. As opposed to  most of the mainstream reproductive rights movements that tend to alienate an entire group of vulnerable people for whom access to reproductive health services including safe abortion is a privilege, reproductive justice is a fundamental human right and it is more about equitable access than choice. Most activists focus on keeping abortion legal as an individual choice, which is crucial, but not enough. If we are truly talking about a rights-based approach, we must advocate for accessibility for every single one of our stakeholders. Reproductive justice   is not limited to safe abortion, it includes contraception, comprehensive sex education, sex-positivity, STI prevention and care, alternative birth options, maternal and child health care, gender-based violence, safe household and heath arrangements and so much more.

Thus, a gentle shift in our perspective and approach can alter the whole trajectory of SRHR advocacy. For many individuals today, access to reproductive health care is not a function of personal choice but rather an illusion of “choice” produced by the intersection of social, political and economic adversities. Advocating for reproductive rights alone without addressing these barriers remains incomplete and in the long term,  will further exacerbate the differences in terms of accessibility and quality of reproductive health services. As reproductive health and rights advocates, we must base reproductive rights around equity and accessibility for all, through radical coalition-building, inclusivity, partnerships and rational resource mobilization. Only then can we attain reproductive justice for all, and by all.

Shivani Rayamajhi is a third year medical student from MMC, IOM. She is a Youth Champion at YoSHAN. She is currently working as the acting national officer for SCORA whose focus areas include CSE, Maternal health and access to safe abortion, sexuality and gender identity, GBV and STIs including HIV.

Children are NOT Gift of God

Help us grow our presence by being one of us